Within MEPLA all calculations can be performed under the more real approach of large deformations. This geometrically non-linear behavior is able to consider the re-stiffening membrane effects arising within a plate.

A linear calculation will give only accurate results, if the plate deformations are small related to the thickness of the glass. When these deformations exceed half of the plate thickness, the membrane effect becomes more important.

For higher loads the difference in non-linear theory compared with simple linear approaches can lead to approx. 3-times smaller deflections. (see the example calculation below)

Regarding this simply supported laminated glass plate, the following results will show some of these effects:

If there is nearly no shear effect set and so each 4mm plate is acting alone, the deformations calculated in a linear way are 52mm against a very much smaller deflection of only 16.16 mm, if more realistic non-linear approaches are used for simulation.

What can be seen in the two pictures above is a totally different stress distribution. Whereas the linear calculation will certainly show the largest stresses in the middle of the plate (highest bending moment) - within the non-linear calculation the stresses are shifted to the corners. The stresses in the middle are now mainly induced by membrane forces and are only in a region of 11 N/mm² instead of 38 N/mm². 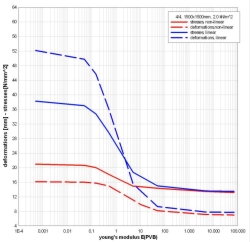 The next diagram will show the influence of shear effects too. As can be seen for the same example above, a variation of the shear stiffness for the interlayer will have additional large effects onto the overall behavior.

So the effect of non-linear calculation without shear effects has for thin plates (like here 4mm) the same effect for the deformations and stresses as if a shear stiffness for the interlayer of approx. 4 N/mm² has been used in a linear calculation.

A second effect for the behavior of laminated glass (in this situation as described before) is here visible too: The highest influence can be found from 0.1 N/mm² to 50 N/mm². Below this regions a laminated glass behaves like two layers without a connection and above this range as nearly monolithic.

This will point out how important it is for designing the glass to consider already smallest gluing effects. If a young's modulus of E = 0.6 N/mm² (G = 0.2 N/mm²) would be used, the stresses in linear or non-linear approaches are already halved.